You Are Here: Cloud Nine E-Cig Reviews » Safety in E-Cigarettes » Top E-Liquids That are Tested for Safety

Top E-Liquids That are Tested for Safety 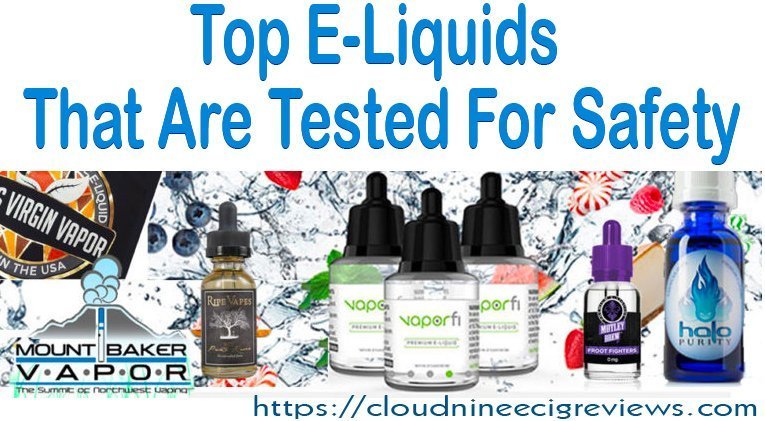 If you're looking for the safest vapor juice brands that have been safety-tested to be free of potentially dangerous chemicals, check out our chart. We've researched the top vape companies, so you know where to buy diacetyl and acetyl propionyl free e-liquids.  All e-liquids never contain vitamin E oil either!

Diacetyl –  (pronounced die-AS-a-til) is found naturally, in foods such as butter and beer. It is a chemical by-product of fermentation.

Some e-liquids contain small amounts of diacetyl, as it creates a buttery, creamy or custard taste.

The diacetyl scare began years ago. A few workers in microwave popcorn factories contracted a rare respiratory illness called bronchiolitis obliterans. In studying the cause of the disease, researchers found that the workers were exposed to large quantities of air-born particles containing diacetyl. It was determined that in these production settings, the inhalation of diacetyl could be dangerous.

Although the risks have been shown to be far lower for vapers inhaling e-juices with diacetyl, the potential consequences of extended diacetyl inhalation is still unknown. As a result, many e-liquid companies have removed diacetyl from their formulas.

Here is the Farsalinos Report on Diacetyl

WHAT IS ACETYL PROPIONYL?

ACETYL PROPIONYL is an organic compound used as an artificial flavor in many foods. AP is also used in e-liquids to lend a sweet, caramel, and/or fruity flavor.

There is some controversy surrounding the use of this substance in vapor products, although there is to date, no concrete evidence that it is harmful to humans.

Until further research emerges, many responsible e-liquid brands, such as those listed below, choose not to use acetyl propionyl in any flavors.

We want you to be informed, which is why our team members contacted the most popular e-liquid companies to learn whether they are testing and revising their ejuice ingredients to exclude diacetyl and acetyl propionyl.

All our recommended e-liquids are the authentic product, formulated by the company listed. We believe these juices represent the very pinnacle of e-liquid excellence.

Looking for the Safest Vaping Devices? Check Out This Post.

If you are concerned about the safety of either diacetyl or acetyl propionyl in e-juice, you do have a choice. Choose e-liquid companies that are transparent with all their ingredients. Our list recommends the top sellers who use 3rd parties to test their ingredients.