You Are Here: Cloud Nine E-Cig Reviews » About E-Cigarettes » Smoking Your E-Cigarette On an Airplane

Yoga Stretches For Sitting At the Computer

Smoking Your E-Cigarette On an Airplane 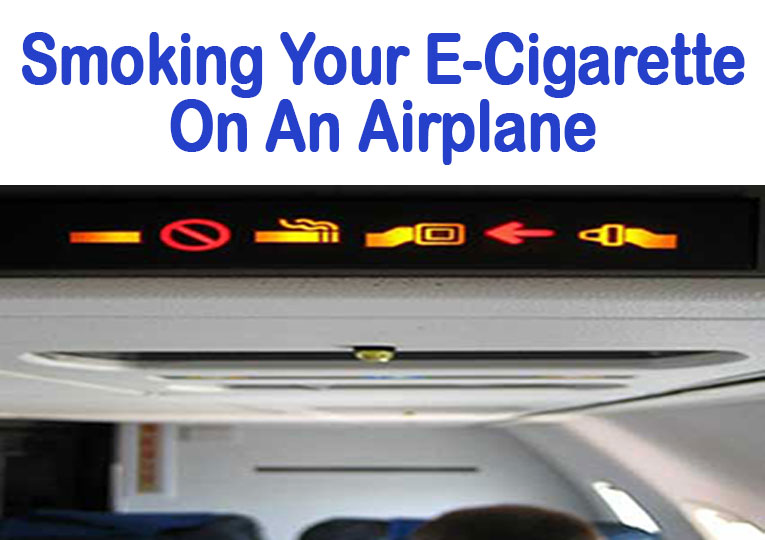 What About Vaping on an Airplane?

Those who have discovered the benefits of vaping, wonder whether they can get away with vaping on a plane. They're also looking for places to vape while they at the airport, and they're wondering how to carry their ecigs in their luggage.

This article is updated regularly and reports findings gathered from major airlines and the FAA, as to current policies regarding vaping onboard, or carrying electronic cigarettes and liquids onboard a commercial airline.  It also includes helpful information gathered from vapers who have dared to smoke their e-cigarette on a flight. We encourage you to leave a comment if you would like to share your own experiences of in-flight or airport vaping.

The Rules of FLYING

According to FAA regulations, smoking a lighted cigarette or anything that produces smoke or flame is prohibited onboard most commercial aircrafts. For years, that ruling was left to the individual airlines.

It was NOT illegal – it was only “prohibited” meaning it was against company policy.

On Feb 11th, 2016 The U.S. House Transportation and Infrastructure Committee, (by a vote of 33 to 26) approved an amendment that adds vaping to the federal ban on smoking in airplane cabins. That means vaping on a plane can have serious consequenses. You may be fined, or the offense can even be considered a felony.


Company policy (and the definition of the “rules”) is still being enforced by your friendly (or not so friendly) flight crew and airline authorities. That means getting caught can vary between a slap on the wrist and getting slapped in jail.

When I first published this article in 2013, I found only three airlines – Japan airlines, Airtran and KLM who actually addressed the e-cigarette issue directly on their websites. Here’s what KLM had to say:

“All KLM flights are non-smoking flights. Smoking is not permitted at any place or at any time on board our aircraft. This also applies to artificial cigarettes”.

Funny that they chose to use the word “artificial” rather than “electronic”. That said, the word vaping wasn't even in the dictionary.

“In addition to smoking, the use of chewing tobacco and electronic cigarettes are not permitted onboard any scheduled or private charter AirTran Airways flight.”

I was relieved that the fat guy sitting next to me on my next flight to Miami wasn't going to spit tobacco into his cocktail napkin.

Japan Airlines posts this disclaimer on their site:

“Smoking is strictly prohibited through out the cabin including restrooms. The use of smoking devices without ignition such as “E-cigarette” is also prohibited as it may interrupt other passengers’ comfort or it may cause the misunderstanding among other passengers. Thank you for your cooperation and understanding.”

Unfortunately it is this “misunderstanding ” that has stopped airlines from allowing e-cigarette use on airplanes.

When e-cigarettes were new to the market, most airline websites did not bother to address the issue. I remember calling all the major airlines to inquire about their policy on the use of electronic cigarettes. Most representatives couldn't supply me with an answer. Some hadn't even heard of e-cigarettes.

Times have changed. In 2018 a nationwide survey has found that 10.8 million adults in the U.S are vaping.

It IS still LEGAL to bring your electronic cigarettes on-board! You just can't use it.

TAKING E-LIQUIDS AND FILLED TANKS ON AN AIRPLANE

Some people have been stopped by security trying to bring their e-cigarette liquid on-board. This also includes CBD e-juices. They must have either forgotten, or never checked out the 3-1-1 liquids rule. In any case, you can now pack your liquids in stowed baggage as they don't have to be carried on. Just follow these rules:

REGARDING ECIG BATTERIES ON AN AIRPLANE

WHAT ABOUT USB CHARGERS?

MORE ABOUT TRAVELING WITH POD VAPES

When I travel, I prefer taking one of my lighter weight vapes. Heavy vape MODs add weight to your luggage and today, every ounce counts.

Ultra-portable Pod Vapes are great for travel. If you are taking an open system pod vape (one that you fill with your own e-juice), pack it in your carry on bag without any e-liquid.


Many years ago, I knew people who have successfully used the product on-board airlines. That's now ancient history. There have been cases reported where vaping passengers were turned over to authorities at the destination airport. The police (or other authorities) decide if they’d like to charge you. Some countries are more tolerant of vapers; but why risk it.


For Those Who Want to Flaunt Their ECigarettes on an Airplane..

Since you should now carry your vape in your hand luggage, there's no law that says you can't flaunt it…as long as you don't vape it!

Show your e-cigarette to your seat mate and tell them about the merits of ecigs and why it's nothing like a cigarette. After all it has no flame, no ash and no smell. Usually people are more intrigued than annoyed. They will of course, want to see how it works, but save your demonstration for later.

Another good way to reduce passenger fears and misconceptions about e-cigarettes is to know about the latest findings. Many people are fearful of second hand vapor, but studies now show that it's poses no apparent risk to human health. Read this report on second-hand vapor.

There was a time when passengers seated in business or first class, were better at obtaining permission to use your e-cigarette, but it's now impossible. I've only been successful on long haul flights, where one or two others shared the first class cabin. Ah, but those days are long gone.

Go to the Bathroom? 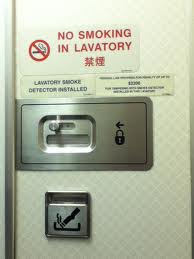 Do you dare to vape?

Many people have smoked their electronic cigarette in the lavatory. This is now against airline policy. More smoke detectors are Optical Based, (meaning they can “see” water vapor smoke)….SO BEWARE.

The One Airline That Says “Yes”…. with a catch. 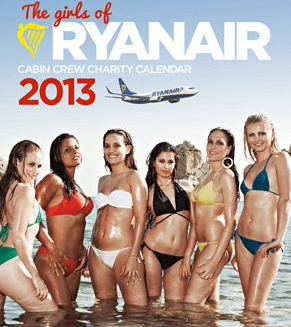 Ryanair, the Irish airline that “conquered” the European market with its amazing low fares, is the one airline that permits the use of electronic cigarettes, but there's a catch – they are Ryanair's version of the e-cigarette and you have to purchase them on-board.

In 2009 the airline started offering passengers over the age of 18, disposable “smokeless cigarettes” for about $8.75 (€6) for a pack of ten. According to Ryanair company spokesman, Stephen McNamara, when smokers can get their nicotine, everybody wins. McNamara concludes,

“As these cigarettes are smokeless, they cause no discomfort to other passengers and can ensure a more enjoyable and stress-free flight for all passengers as non-smokers will no longer have to cope with moody smokers in need of nicotine.”

Note : The Ryanair website does not mention e-cigarettes specifically. E-cigarettes are not on the list of their permitted electronic items. In trying to get an update on their smoking policy I discovered that the only telephone number available is their direct line to Ireland, which in my case would be an international call.  The website does not offer a Customer Service e-mail either.

The bottom line is that airlines disallow all cigarettes, including the smokeless and electronic ones. Unfortunately the reason for this is not because they believe electronic cigarettes pose a danger to flight systems. It is because they produce a vapor, and that may alarm flight attendants who are too busy serving pretzels to distinguish between ecig vapor and an electrical fire.

The only way this policy will change is when the true nature of the product and its benefits, including the benign impact on the environment gains recognition.

As this remarkable product becomes mainstream; as more tests prove that second-hand vapor is harmless; as more scientists submit tests that ecigs are safe to vape, and as sales and positive press continues to grow, airlines may change their policy. Airline competition is certainly on the increase and there is a whole new market of e-cigarette vapers out there.

Until then, vaping on planes comes with the risk of your being turned over to authorities when you land, plus (according to recent comments added to this post) being subject to fines and future travel restrictions.

If you have successfully (or unsuccessfully) used an electronic cigarette in flight, we'd love to hear about it, so feel free to leave a comment below.

Disclaimer: The information contained in this website is for general information and discussion purposes only. The information is provided by cloudnineecigreviews.com and while we endeavor to keep the information up to date and correct, we make no representations or warranties of any kind, express or implied, about the completeness, accuracy, reliability, suitability or availability with respect to the website or the information, products, services, or related graphics contained on the website for any purpose. Any reliance you place on such information is therefore strictly at your own risk.