You Are Here: Cloud Nine E-Cig Reviews » About E-Cigarettes » Don’t Give Up Smoking – Just Switch To a Safer Product

Don’t Give Up Smoking – Just Switch To a Safer Product 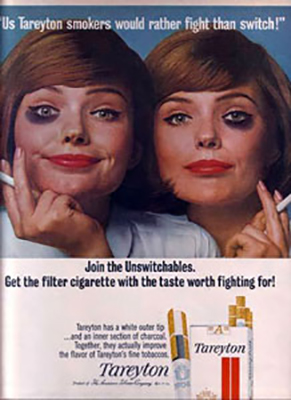 If you are of a certain age, you may remember that cigarettes were once advertised on television. The Marlboro man puffed away to the macho theme song from “The Magnificent Seven”. He was magnificent to behold and smoking was sexy, popular and an accepted method of relaxation.  Kools were cool, and Tareyton fans “would rather fight than switch”. They even sported a black eye.

Today, smoking is not cool. Cigarette-related illnesses kill more people in America than alcohol, suicide, car accidents, homicide and illegal drugs combined. There are over 4000 carcinogens in a single Marlboro cigarette including tar and carbon-monoxide. A few of those ingredients have been shown to lower sperm count levels.

The Marlboro man may have been macho, but there’s a good chance that he was fertility compromised as well. It is common knowledge that cigarettes are addictive. That’s because they contain nicotine. Nicotine is harmless by itself, but it’s what makes cigarettes so addicting.

Your activity programming is also a factor. You know, you finish a meal, you have a cigarette; your Mom calls on the phone, you light up a smoke. That’s body/mind programming that’s also hard to change.

Electronic cigarettes, (or e-cigarettes) were invented in China where nearly three-quarters of adult men smoke. E-cigarettes have, over the past 15 years, made their way to the western world. Popularity is growing at an exponential rate as people everywhere discover how easy it is to “switch” from tobacco cigarettes to the non-toxic, highly satisfying electric ones.

Imagine vaping a safe cigarette that allows you to still inhale a smoke-like vapor while giving you your nicotine buzz. There are several styles of e-cigarettes but they all work on the same principle – instead of burning tobacco smoke, you inhale flavored water vapor mixed with a solution that contains flavor and nicotine.

You can choose your flavor, and you can choose the level of nicotine you wish to inhale. Beside tobacco flavor, there’s menthol, chocolate, vanilla, apple and the list goes on.

Nicotine levels range from super high as in unfiltered cigarettes, all the way down to Zero! If you want to wean yourself off the smoking habit you can start at a higher level of nicotine and work your way down to no nicotine. Then all you have to work on is that body/mind programming stuff.

Not all e-cigarettes are alike and neither are the distributors. Most are sold on-line. Reputable companies like Vaporfi and DirectVapor will tell you that their products have been tested for safety, and they’ll offer you a 30-day warranty.

Some companies have defective products and many are impossible to deal with when it comes to customer service. I know this because I’ve been testing out various e-cigarettes from many different electronic cigarette companies for years, in an effort to find those that deliver on all counts.

I also think it’s important to look for a supplier whose website is attractive, highly professional, easy to navigate.

With E-cigarettes you can smoke almost everywhere!

Because E-cigarette smokers “vape” rather than smoke. It’s possible to smoke in no-smoking zones such as airports, restaurants, in your car and at home where the air stays nice and clean. Since there’s no smoke produced, there’s no fear of offending anyone and there’s no hand carcinogens in the air. There are also advantages such as cleaner clothing, hair, furniture and you are no longer a fire hazard to your family.

You'll also be surprised to find more money in the bank at the end of the year. (yes, it is highly cost-effective). People who have started vaping love it. Some have cut way down on tobacco cigarettes and some have given them up entirely in favor of e-cigarettes. There are thousands of testimonials out there from happy e-cigarette smokers. Most will tell you how much better they feel, how much more energy they have and how they’ve saved a bundle buying e-cig cartridges instead of packs of regular smokes.

So, If you’d rather fight than switch, be sure to check out Cloud Nine's excellent articles. Need to compare prices and details of the most popular e-cigarette brands? Check out our comprehensive  Best Selling Electronic Cigarette Comparison Chart.

Thanks for the visit. Please feel free to leave a comment below. I am happy to answer any questions.