You Are Here: Cloud Nine E-Cig Reviews » About E-Cigarettes » Is Vaping the Best Way to Quit Smoking?

Is Vaping the Best Way to Quit Smoking? 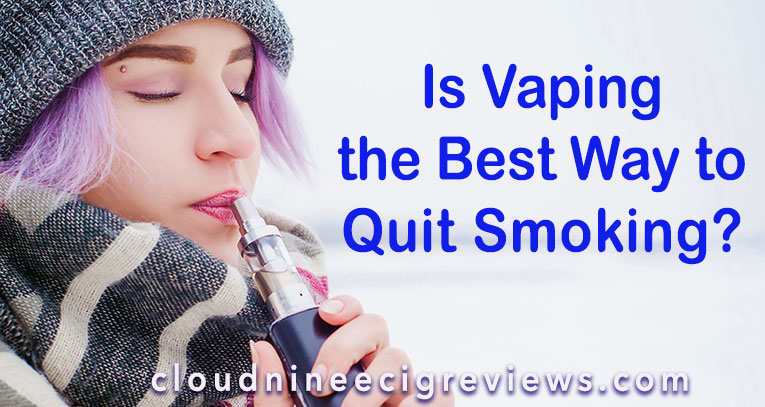 Is Vaping the Best Way to Quit Smoking?

Many health organizations especially those in the United States do not endorse vaping as an effective way to help smokers stop smoking. At the same time, there is growing evidence that more smokers trying to quit are turning to e-cigarettes over any other nicotine replacement therapy.

In Oct. 2020 the Cochrane Tobacco Addiction Group produced evidence from 50 studies around the world, suggests vaping could boost the number of people who stop smoking. The study was published in the London edition of Reuters.

Another study was conducted in the UK, where there is tremendous support for the vaping industry. Funded by Cancer Research UK the study confirmed what many vapers, (even those in the U.S.) already know — that vaping helps smokers quit.

Although this was a small study, lead researcher, Dr. Caitlin Notley, of Norwich Medical School, at the University of East Anglia noted that the results were positive and surprising.

The participants, most of whom were long-time tobacco cigarette smokers had tried to quit many times, although they had never tried vaping. 17% of the group never even wanted to stop smoking.. but after trying vaping, they did.

The reason participants were successful in quitting was that they found vaping more enjoyable than smoking.

According to Dr. Notley, the study had some unexpected results.

“The really interesting thing we found was that vaping may also encourage people who don't even want to stop smoking, to eventually quit.

“Not only does it substitute many of the physical, psychological, social and cultural elements of cigarette smoking, but it is pleasurable in its own right, as well as convenient and cheaper than smoking.

“Vaping is a viable long-term substitute for smoking, with substantial implications for tobacco harm reduction.”

Here’s Another Positive Study on Vaping and Quitting

One of most respected U.S. studies on the effectiveness of e-cigarettes as a viable method to quit was conducted by Dr. Shu-Hong Zhu, Professor, Department of Family Medicine and Public Health, University of California, San Diego. It was reported in the BMJ (British Medical Journal).

The study concluded that..

“The substantial increase in e-cigarette use among US adult smokers was associated with a statistically significant increase in the smokingcessation rate at the population level. These findings need to be weighed carefully in regulatory policy making regarding e-cigarettes and in planning tobacco control interventions.”

In an extensive survey of Europeans conducted by Dr. Konstantinos Farsalinos, a cardiologist at the Onassis Cardiac Surgery Center in Athens, more than 6 million have quit smoking with the help of e-cigarettes. According to Farsalinos,

“These are probably the highest rates of smoking cessation and reduction ever observed in such a large population study.”

What Are the Most Popular Methods To Quit Smoking?

The most popular ‘quit smoking’ methods are:

Here They Are in Order of Preference:

What Do the Percentages Above Prove?

Brad Rodu, professor of medicine at the University of Louisville and an anti-smoking advocate believes these figures are important in understanding how people choose to quit. In addition, vaping has become an important part of the equation.

“The CDC has finally acknowledged the popularity of vaping. This study documents that vaping is American smokers’ most popular quit-smoking aid, despite a broad misinformation campaign labeling e-cigarettes as neither safe nor effective. Far fewer smokers use FDA-approved aids, which have been promoted by federal health authorities for many years. Smokers know that, while safe, they are decidedly ineffective.”

What Does the FDA Have to Say About Vaping?
Does Any Health Organization Believe It Is Safe to Vape?

In 2015 Public Health England issued a landmark statement saying “e-cigarettes were at least 95% safer than tobacco cigarettes.” They confirmed that report in 2018.

In another report from the UK, the Action on Smoking and Health (ASH) found that half a million smokers switched to e-cigarettes. Most of those who took up vaping are now ex-smokers.

In the U.S. the CDC chooses to disregard these studies, taking their cue from the FDA.

The CDC noted that,

“There is no conclusive scientific evidence that e-cigarettes are effective for long-term cessation of cigarette smoking. E-cigarettes are not approved by the FDA as a smoking cessation aid.”

According to Gregory Conley, president of the American Vaping Association, there is strong evidence.

“A prior CDC study showed that among smokers who had successfully quit in the prior year, nearly one-fourth were current users of e-cigarettes.”

It’s interesting to note that there is no conclusive scientific evidence that any of the other methods smokers use in trying to quit is any more effective than vaping. There is only conjecture.

Many believe that outdated ideologies or financial conflicts may be blinding the CDC and other anti-vaping organizations such as the American Lung Association.

Unlike in the United Kingdom, Dr. Vivek Murthy, the US surgeon general has not recognized the public-health question of whether e-cigs and vaporizers offer smokers a reduced-risk alternative to traditional cigarettes. Dr. Murthy chooses to say that e-cig technology should be embraced only when there is enough evidence that vaping can help smokers who have failed to quit by other methods.

In the meantime, the media is being led to report only the fact that there is not enough evidence to prove vaping is 100% safe, or that it is safer than smoking.

Medical professionals in the U.S. still ignore reputable scientific vaping studies showing vaping is safe. They choose to warn people of the yet unknown consequences of vaping.

All this is true, despite the fact that in June, 2018 the American Cancer Society endorsed vaping as a viable method for quitting tobacco cigarettes. Their groundbreaking statement also included a message to the FDA, urging them to consider the ramifications on public health if they continue their vaping industry regulation policies.

“The FDA should assess whether e-cigarettes help to reduce tobacco-related morbidity and mortality, and the impact of marketing of e-cigarettes on consumer perceptions and behavior.”

It is still unclear whether vaping products will ever be approved by the FDA as a viable method for quitting cigarettes; however, testing will continue and positive results are likely.

One day the air will clear.

Have you been able to quit cigarettes using a vaping device? We’d like to hear from you, so please leave a comment!